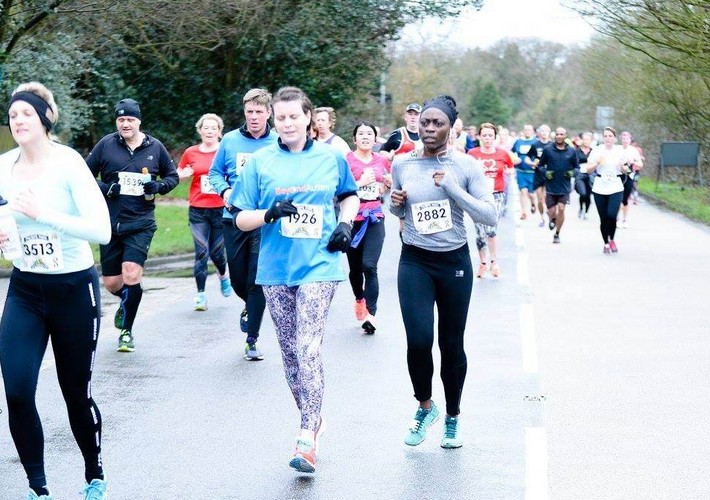 On the 23rd April our CEO, Tracie Linehan, ran the London Marathon for BeyondAutism and Cancer Research UK. Alongside her training routine, Tracie has been writing about her experiences. Keep an eye on this page for further updates!

Having successfully completed the first 4 weeks of the couch to marathon training plan I am mindful of “the hare and the tortoise” and the much overlooked character “the snail”!! I did at times feel like I was carrying the weight of the task on my back – 26.2 miles of continuous movement preferably before the sweepers are re-opening the streets. I am reading “Keep on Running” by Phil Hewitt – his message is loud and clear, it’s all about mind-set. Yes you need fitness and good eating habits but most of all you need to be bloody minded about achieving a finish at the marathon. I am known to be stubborn and realised that for once this may be a valuable attribute. My snail pace remains but I feel good about it, determined that week on week I am improving and occasionally I tell myself that it’s quite enjoyable. I was told on good authority that I needed to learn to push through the pain and will be trialling a great “in my head” tick sheet when on longer runs, looking for landmarks rather than counting down the miles! Using the whole experience as a tourist opportunity. So I am a quarter of the way through the 16 week training plan, I have managed an 8 mile run and I am feeling less snail and more tortoise (which incidentally is my favourite animal).

So I am six weeks into my training programme and am confidently running 6 miles every session at the gym. Sunday is designated long run day. Armed with a route I decided that I needed to get some outdoor running experience and set the ambitious goal of 8 miles. I also thought it would be a great opportunity to try out my “look for a landmark” plan/distraction technique. As it turns out Grantham doesn’t have that many landmarks and after I’d passed the leisure centre and the police station I needed a new “keep my mind busy” tactic. This was helped by the driving sleet that I was running through ensuring that I was focused on not slipping over, made much more challenging when I reached the canal tow path. A path would have been nice. Puddles and mud, puddles and mud. I’m sure my finish time was greatly affected by the amount of weight I was carrying on my trainers. Now that my footfall was so heavy I was waking up the ducks and caused the resident swans to flap and hiss in alarm! But at least the scenery was keeping me going. 5 and half miles round I reached Casthorpe Hill. I was tired, my feet were very wet and very heavy, I needed climbing gear (or a chair lift) and I decided that a brisk walk up was better than stopping! I did it! At the top I picked up my pace again and was delighted to make it home (a very welcome landmark). I’m hoping that all these little challenges overcome will stand me in good stead when faced with the much talked about “wall” and give me the courage and resolve to get to the finish.

Back in October last year my sisters decided that entering the Thorpe Park Half Marathon would be a great training run for me. Half a marathon, 13 miles of continuous running. Bearing in mind one of my sisters runs like a gazelle, a 1hr 37 minute half marathon and the other covers 13 miles in 2 hours making it literally look like a walk in the park. During the weeks approaching the race I had managed a 10mile training run and had just about mastered drinking whilst moving! All the literature, hints and tips to marathon running suggest an event to allow practice under race conditions so I ate my porridge at 6am, swallowed 2 nurofen and a Lucozade power drink all before arriving at the venue! Success. I completed the course in a very pleasing time greeted at the finish line by my sisters who’d finished and had time for food and photos!! But my legs hurt, they hurt a lot! 13 miles was the furthest I’d ever, ever run and I had only one other thought – on London Marathon day I’d need to cover that distance twice!!!

Have you ever tried to map an 18 mile route that is totally flat? Thank goodness for the Grantham canal. Though as I passed the locks it dawned on me that they meant “hill”!! So last week I ran 15 miles to my friends house for a cup of tea and a catch up, the first 10 miles was comfortable all along the canal. I made a pit stop in a lovely little pub, they filled up my water bottles,  I used the ladies! Big mistake. It was so difficult to get back into a rhythm and I was faced with hills. There was also a rather scary stretch along a main road with no landmarks to speak of, though the sight of the Bingham sign was a huge boost. I reached my friends house in 3 hours and was faced with the biggest challenge, 15 steps up to her front door, it took me almost as long to get up them!!

This week I decided that a loop, without a pit stop, that followed the canal to the lovely little pub and back would be 18 relatively flat miles. It always amazes me that I don’t meet more people, the canal path is beautiful. I did encounter a lot more hissing swans which pushed my heart rate to near dangerous levels. I practised taking energy gels during this run, I think they helped. Though I’d miscalculated my water, jelly bean and energy gel intake and ran out with 3 miles still to go. Everything hurts, my legs, my back and my feet but I walked the mile and a half to the train station this morning in an attempt to loosen up and recover in time to run again!

I have successfully got two 18.5 milers in the bag and though tired was feeling ready to take on the last long distance before tapering off the running, in preparation for the big day. I planned a route along the canal that involved laps so that I could reach 22 miles. I felt a bit like Bill Oddie as I set off and saw a blackbird, two swans (no longer hissing), a robin, 2 Canada geese and a duck. 5miles in and my painkillers were already wearing off. And then I hit it, the infamous wall. It stood firm in front of me at 9 miles. My brain was telling me to run through the pain, I think I was in fact saying this out aloud to myself! My body was saying a huge NO, that is not going to happen today!

I got back to my car, distraught, confidence shattered and immediately phoned my sister (the Marathon running gazelle). She was brilliant, my own personal coach, reminding me of everything I’d achieved so far and how this would make it all possible on the day. She gave me the confidence to go home and have a bath, rather than trying to manage another 13miles. We agreed that the next three weeks was all about strength and fitness, not mileage.

So as I start the three week “run” to the London Marathon I am feeling confident; for the first time in weeks I can walk on a Monday without the pain in my feet, calves and hips. I’m going to swim, do interval training, work on my core and eat properly!! I’m excited (extremely daunted) but excited.

All the training, the abstaining from alcohol and a week of carb loading got me to the blue start line, in pen 8. The London Marathon is a feat of impressive organisation and even though I was in the blue start zone 2hours prior to the gun, the time went very quickly, albeit mostly spent going to the loo!! I made a new friend – Nikki from Doncaster, she was as nervous as me and it was great to have a running buddy keen to monitor our speed so that we didn’t go off too quickly. We got very excited when we reached the 1 mile balloon arch, having already passed 3 people running in an airplane, someone dressed as a tree and a very elderly gentleman using crutches (total respect!). The highlight for me was rounding the bend between mile 12 and 13 to see Tower Bridge – I was still feeling good, I knew my family were waiting across the bridge and very importantly I was almost half way!! I’d split up from Nikki by this point (as I’d needed another loo stop!) and suddenly mile 14 loomed large along with a totally deflated feeling of still having 12miles to go. I walked for a bit and gave myself a good talking to – I knew that the BeyondAutism cheer team would be at mile 17 so I picked back up into a jog and aimed for them. If you ever go along to spectate do not underestimate how much of a lift you give the runner as a familiar face in the crowd, I was so looking forward to seeing the team and unfortunately completely missed them – more deflation, coupled with what I can only describe as a hill at somewhere around the 19/20-mile mark, I slowed again to a walk. Coming back along in front of the Tower of London I unexpectantly heard someone shout “Tracie, Tracie Linehan” – the Rainbow School staff cheering wildly were an amazing boost and I set off running again. Getting to mile 23 was a psychological turning point, though my legs weren’t prepared to cooperate, only 3 miles to go, that’s just 5km and on a normal day just 30 minutes of running. That had to have been the longest 30minutes ever (probably because it was about 40minutes!!), I was also getting a little bit grumpy about the number of wonderful spectators calling out my name, urging me on – with pints of larger and gin & tonics in hand! As I rounded the bend at Buckingham Palace, sort of jogging, keen to run over the finish, I saw my son and his girlfriend waving and cheering – I could have cried. I did run over the line, remembered to smile, was given my medal (very heavy) then handed my goody bag (even heavier!!) and was greeted by my gazelle sister who’d waited 1hour 40minutes for me to get to the finish behind her – I did cry. I achieved all my goals: I was not passed by a man carrying a tumble dryer, I ran passed 2 rhinos, I finished the London Marathon and in so doing I raised over £2,500 for my chosen charities (BeyondAutism and Cancer Research UK). Would I do it again? Ask me when my legs have stopped hurting!!

If you would like to support Tracie in her challenge you can visit her fundraising page here. 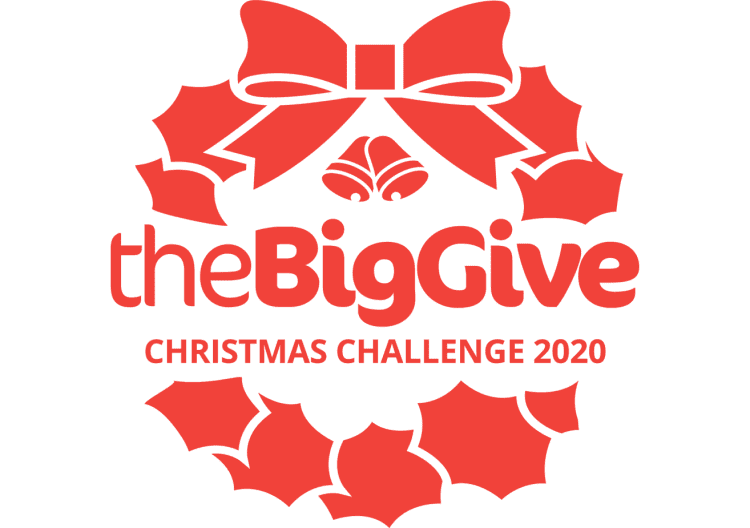 We’re delighted to announce that, thanks to your generosity, our Big Give Christmas Appeal raised over £4,100! Thank ... 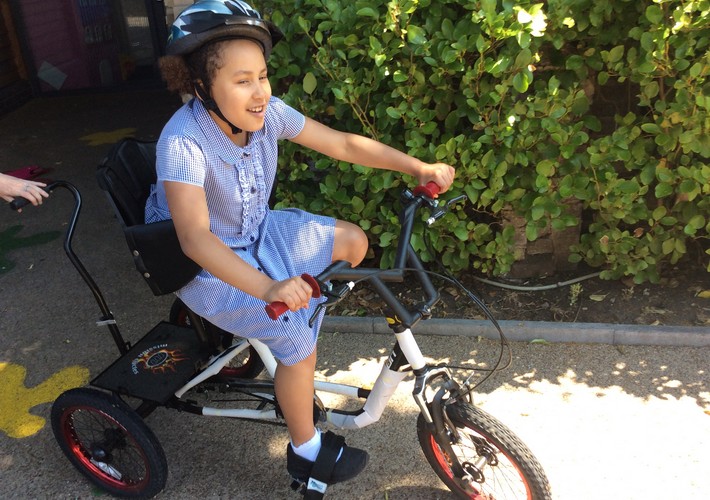 Sport England grant gets pupils on their bikes!

With so many other activities currently still not possible due to the coronavirus pandemic, taking exercise is more impo...